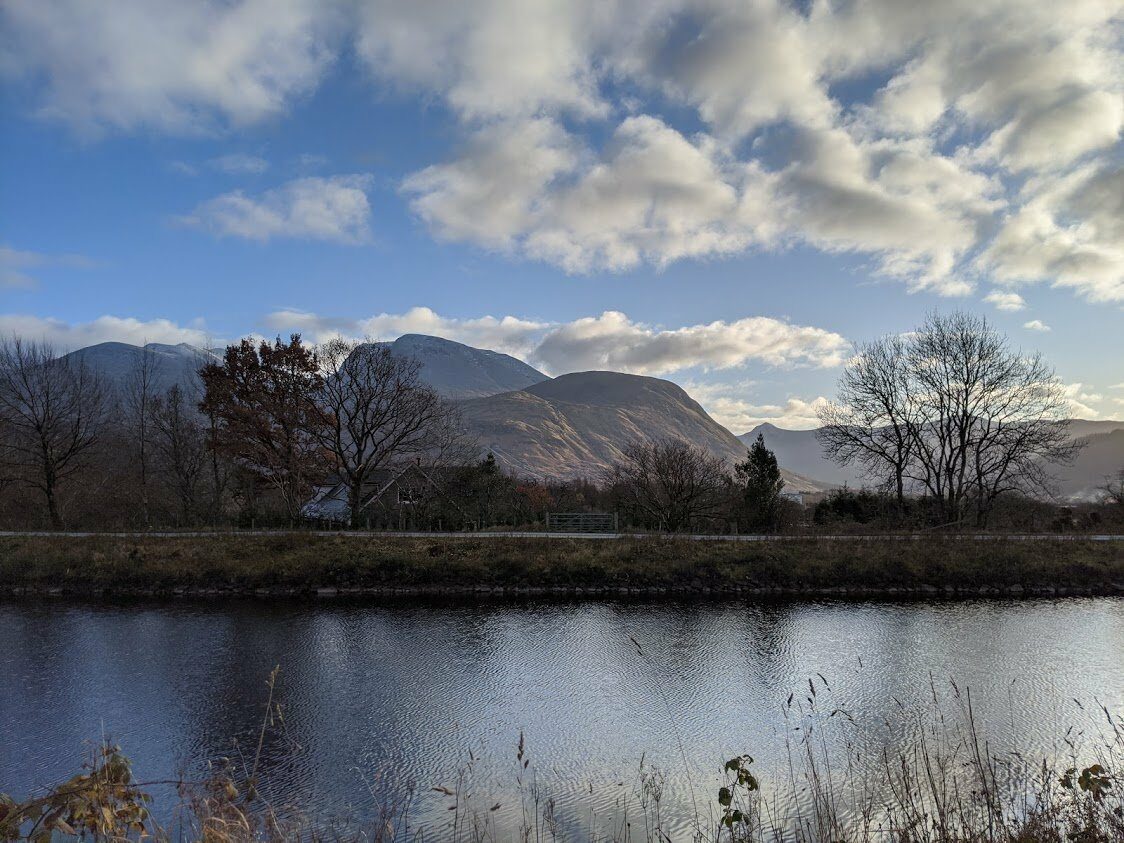 The cutting, building, and constant improving of canals throughout the world have been an essential part of human civilization. From the great canals of Mesopotamia and China to Suez and Panama to the Wardle canal, the shortest canal in England at 154 feet, these engineering marvels have played an important role in history going back centuries. Welcome to the Caledonian Canal!

Scotland’s contribution to the many canals of the world is the Caledonian Canal, a 60 mile long, arrow straight path that cuts through the Great Glen from Corpach in the south, near Fort William to Inverness in the north. Although short in distance compared to other canals, the Caledonian Canal is recognized as one of the great waterways of the world, offering spectacular scenery and varied opportunities to experience it on foot, bike or boat.

Our first of two experiences with the Caledonian Canal began with an hour long walk from Inverness city center to the Dochgarroch Lock, the northernmost set of locks on the canal. Crossing over a bridge with the Inverness marina off to our right we spotted the first of four locks. Having seen several locks in England we knew what to expect, yet knowing that we were at the northern terminus of this 60 mile long man-made wonder was exhilarating. With impossibly blue skies and the quietude that winter brings we relished seeing the ducks, geese and swans that call this waterway home. In total we covered roughly five miles in one direction along this marvel of cross-country engineering.

If only we had the time to travel the entire 60 miles!

The Caledonian Canal is recognized as one of the great waterways of the world, offering spectacular scenery and varied opportunities to experience it on foot, bike or boat.

Our second day trip took us south along the River Ness until it ran parallel to the canal. From this point we had the river on one side and the canal on the other. Both bodies of water were smooth as glass with the only disruption being the occasional flock of ducks coming in for a landing. With unseasonably warm weather we spent half our day on this beautiful leg of the canal. The bare trees offered a chance to see where birds make their nests, live and raise their young…something that is difficult to observe when they are dressed in their spring wardrobe of green. This is truly unspoiled scenery at its finest.

The Caledonian Canal is a Victorian creation of mind bending proportions. The building of the canal involved hand digging 22 miles of the 60 mile long transportation corridor in order to link the four inland lochs (lakes) together.

The ultimate goal was to facilitate boats transporting all sorts of goods. With an eye toward trade the canal was originally promoted by powerful businessmen in an attempt to link Scotland’s east and west coasts. It was also intended to give passage to vulnerable naval ships, by offering them an alternative route to the far north without going around Scotland’s treacherous tip.

The massive undertaking took nearly 20 years to finish and, when completed, had a total of 29 locks. Unfortunately, by the time it was finished the world, and shipbuilding, had moved on and the canal wasn’t wide enough to accommodate the newer ships of the day. However, the Caledonian Canal continues to be recognized as a masterpiece of engineering and design and is one of Scotland’s most beautiful recreational boating arteries.

Not ones to rest on their hands, the Scottish government is increasing their efforts to maintain and expand the future use and vibrancy of the canals by investing billions of pounds in the lowland and highland canal corridors across Scotland. This renewed interest in the canals has acted as a catalyst for extraordinary investment, and improvements, on and around their banks, contributing to the building of thousands of new houses as well as robust job creation. This investment is testimony to Scotland’s dedication to the “great canal” and to the preservation of its legacy.

Our next stop along the Caledonian Canal came while staying in Fort William, which is very close to the southernmost portion of the canal. Fort William proudly promotes itself as “the outdoor capital of Scotland” and for good reason. With plenty of hiking, rock and ice climbing, mountain biking and skiing its draw with adrenaline seekers is undeniable.

Although we did take some fantastic hikes during our stay our first adventure took place on slightly more level terrain. We were anxious to see more of the great canal! On the advice of some friends we walked to the small village of Banavie, about four miles from Fort William. Banavie is home to the impressive set of eight locks known as Neptune’s Staircase.

A stunning achievement in engineering, Neptune’s Staircase raises the canal by 19 meters (62 feet) over a quarter of a mile of continuous masonry and takes roughly 90 minutes for a boat to travel up or down the locks. It has a well deserved reputation as the longest staircase lock in Britain. These eight locks are by far the single most impressive engineering feat on the entire Canal.

Originally the system was hand-powered but has since been converted to a more modern method of hydraulic operation. At the bottom of the staircase is the Banavie Railway Swing Bridge, another engineering marvel that, like Neptune’s Staircase, was once hand operated. Sitting adjacent to the Railway Swing Bridge is the Banavie Swing Bridge which carries vehicular traffic across the canal. These are two of the few remaining operational swing bridges that cross the canal. Seeing these impressive wonders of what man is capable of designing and building is truly breathtaking.

The staircase and the two swing bridges are the second-to-the-final leg of the canal before it reaches the southernmost terminus at Corpach where it meets up with Loch Linnhe on its way to the mighty Atlantic. Unfortunately, due to the low season for recreational boating we were unable to witness the locks, or the swing bridges, in operation yet that hardly dampened our enthusiasm for seeing them first hand.

Walking north along the canal from Banavie the ever-present Ben Nevis mountain makes for an impressive backdrop. Ben Nevis, known locally as the “mountain with its head in the clouds” or the “venomous mountain” is the highest mountain in the UK standing at an imposing 4500 feet above sea level. It is a photographer’s dream as it is nearly impossible to take even a mediocre photo of this legendary, snow capped mountain. Another glorious day of pure blue skies and crisp early winter air made for a great day of exploring a new section of the towpath. The brilliant colors that come with spring were temporarily replaced by a basket-like palette of brown, tan, pumpkin, rust and warm red.

Our return trip from Fort William to Corpach proved no less interesting as it is the southern terminus of the Caledonian Canal, and as such will mark the end of our time spent exploring this great waterway. As we walked toward Corpach and the final set of locks we glanced through the trees to Lake Eil to what appeared to be a massive shipwreck. We located a trail along a waterfall to the beach and there she was…the MV Dayspring, a herring and mackerel fishing boat that came unmoored during a vicious storm in December of 2011 while docked in Fort William.

Pushed across Lake Eil the giant vessel came to rest on a rocky beach where it remains to this day, patiently waiting for some ambitious entrepreneur to reinvent a new life for it. The locals have more or less adopted the ship as one of their own as it draws photographers and shipwreck enthusiasts from around the world.

The day that we encountered the MV Dayspring there were no photographers, shipwreck enthusiasts or ambitious entrepreneurs in sight, leaving us alone to marvel at this photogenic, rusting hulk of a shi

Returning back to the canal we pressed on to Corpach and the final stretch as it reaches the confluence of Lake Linnhe and Lake Eil on its way to the Irish Sea. With its one-of-a-kind set of “double locks” set just upstream from the massive sea lock it is the final feat of engineering along the canal.

Corpach harbor was as quiet as the resting shipwreck with none of the tour boats or ferries that regularly make their way there during the busy tourist season. Once again, the canal was all ours, save for the flocks of hungry waterbirds used to receiving handouts from the locals and day-trippers. Although we had no snacks to offer that did stop hundreds of them from congregating near the shore in hopes of another meal.

We bid Corpach, the canal and our winged friends farewell and boarded a bus back to Fort William for the day. While our time spent on the Caledonian Canal may not have covered its entire length what we did see and experience was truly one of the outstanding highlights of our trip to Scotland.

Textbooks and dictionary definitions will tell you that the simplest definition of a canal is a man-made waterway valuable for a variety of uses including crop irrigation, land drainage, urban water supply, hydroelectric power generation, transportation of cargo and people as well as a wide variety of recreation.

Among the many things that we learned while exploring the “Great Canal” was that building it was anything but simple. It required vast sums of capital, both human and monetary, along with numerous setbacks as well as business and political wrangling at the highest level. In the end, the canal was limited to a waterway that would never be used for its intended purposes.

Nonetheless, today it is still recognized, and celebrated, as one of Scotland’s greatest engineering achievements. For millions of Scots, as well as travellers from around the world, that is enough.