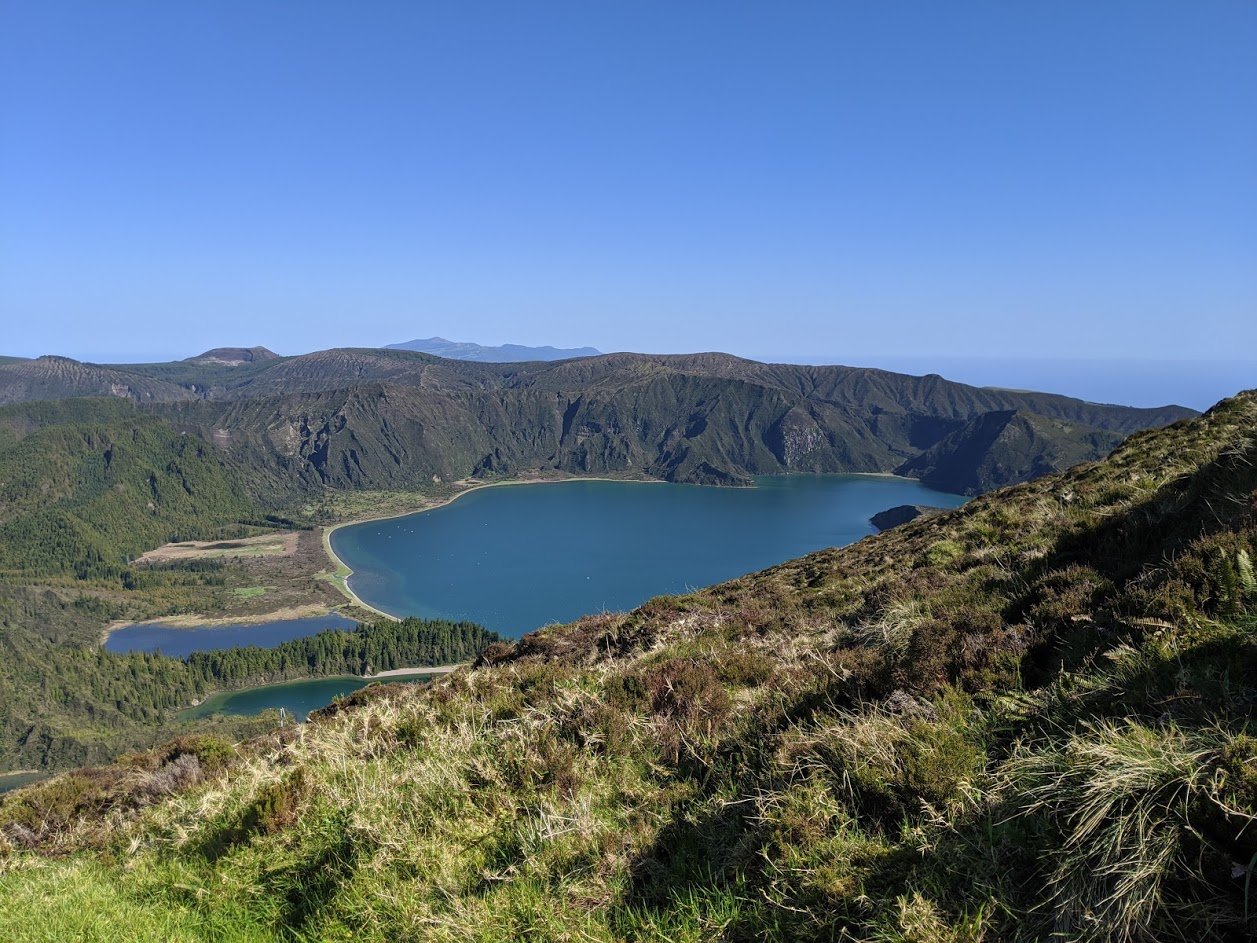 On a cool February day with radiant blue skies we took the drive from Ponta Delgada to the Miradouro da Lagoa do Fogo Hike ( Lagoa do Fogo Hike overlook ). We needed just such a clear day to view this beautiful lake owing to the fact that, at this time of year, the rains can be torrential and the lake it is often shrouded in fog rendering it out of view.

Lagoa do Fogo (Lake of Fire) is a crater lake in the middle of the island of Sao Miguel in the Portuguese archipelago of the Azores. It has the distinction of being the highest lake on the island which contributes to its unique weather. There are several lookouts from the rim of the lake that provide for stunning views. However, with impossibly steep walls there are very few ways to access the various pristine beaches at the bottom.

With binoculars in hand we spotted just such a beach at the opposite end of the lake from the overlook. There must be a way to get to that beach we thought. With a little bit of research and the guidance of a good map we located the Praia to Lagoa do Fogo hike, an 11 kilometer there-and-back hike that would take us to that pristine, far off strip of beach.

We committed to return the next time there was another clear day.

Being that this was February and the tourist season had yet to pick up steam we were not surprised to find only four or five cars parked along the road to the trailhead. It was then that we knew we would more than likely have the trail to ourselves.

And what a trail it was!

This spectacular hike can be described in roughly four sections. First is a steep uphill climb from the road through farmland followed by a vast, shaded, Japanese Cedar forest that runs along an irrigation channel. The third stretch is an immense valley covered in green on both sides dotted with strategically placed concrete chutes that look like fish ladders. Their job is to channel the epic downpours into the larger runoff system. The final leg climbs out of the valley and then drops down to the shore of the lake.

The initial stretch was a steady uphill climb for the first two to three kilometers and accounted for the majority of the 300+ meter elevation gain. With the exception of an occasional glimpse of the ocean there was not much of a view on this leg of the hike as we passed through rolling meadows filled with grazing cows and a smattering of goats.

The hike became more interesting once we topped off and turned into a dense forest filled with Japanese Cedar, Azorean Heather dripping with moss, split-leaf philodendron the size of elephants ears and gigantic tree ferns. This stretch of the trail ran parallel to a concrete “levada” or irrigation channel which functions as the final leg of a rainwater runoff system starting further up the mountain. This section was not as steep as the beginning yet we were still travelling gently uphill. 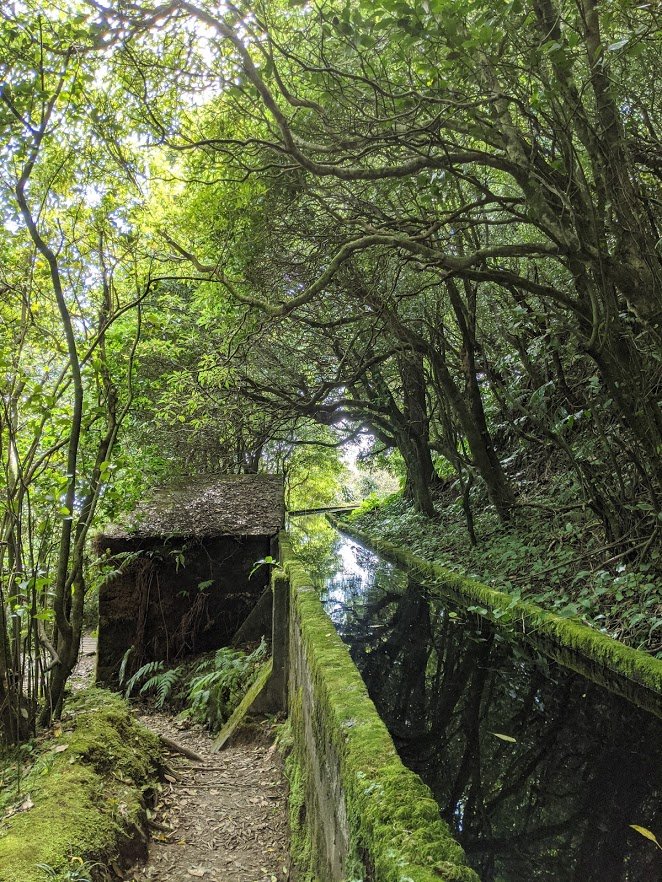 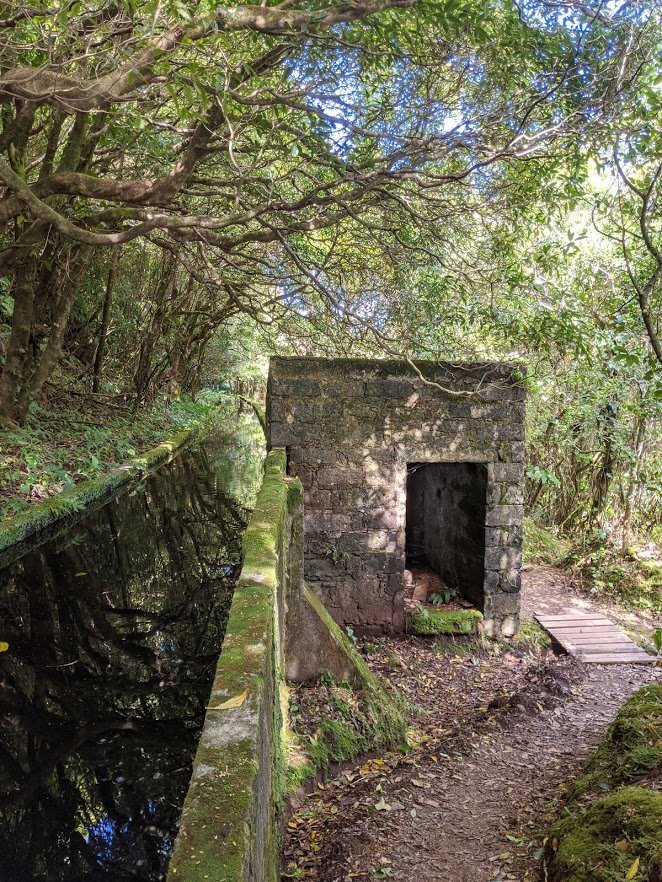 Although the water in the levada was crystal clear the structure itself was covered in a thick blanket of moss and multi-color lichen which added to its jungle like appearance. Along the way waterfalls shot from the sides of the cliffs and the sound of rushing rivers and streams was everywhere, even if you could not always see them. Combined with the dense green forest it felt straight out of an Indiana Jones movie. It was a magical setting and worth the slog up the hot, dry beginning of the trail to reach it.
Soon we came to the end of the dense forest and emerged into the enormous valley of Ribeira da Praia, a vast open area, covered in low scrub. Like night and day we went from the cool, moist forest into a hot, dry valley with not a cloud in the sky to provide relief from the midday sun.

We hiked the length of the valley marveling at just how lush it was. After passing kilometer marker 10 we climbed up, and out, catching our first glimpse of the lake with its calm azure waters.

Two hours since we started and we have arrived!

Once at the lake we descended a cobblestone path to the small strip of beach we had seen from the lookout high above the lake, took our shoes and socks off and enjoyed lunch at the waters edge. With no one else around we relished in an hour of solitude before packing up for the return trip.

Searching across the lake through our binoculars we spotted the lookout that just a week ago beckoned us to this very spot!

During our time on the island we have experienced many fantastic hikes yet the Lagoa do Fogo excursion will always resonate as one of the most unique and memorable. The combination of walking through a Japanese Cedar forest, wide open views of the Atlantic, lush greenery, and of course the lake itself, made for a magical adventure.