Our stay at Troy’s Barn 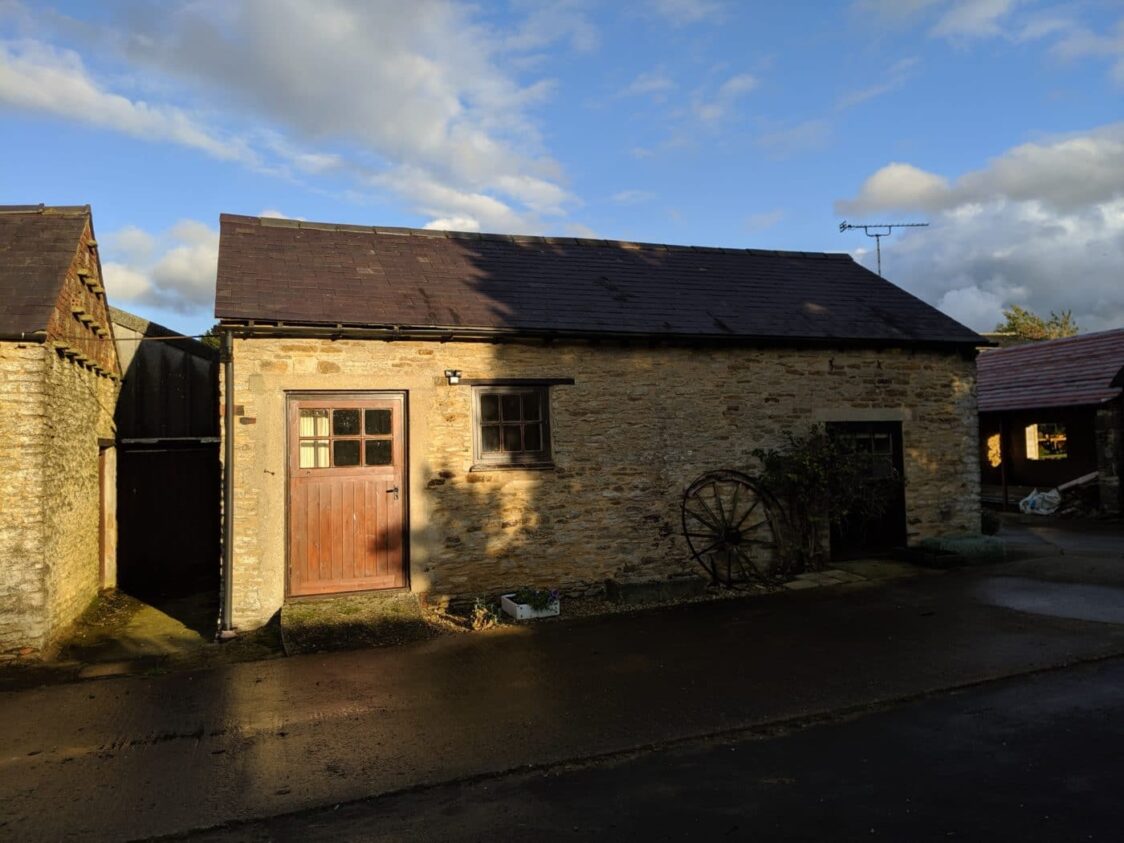 Staying in a barn may not be everybody’s cup of tea. Even if it is in England.

However, staying in a renovated sheep barn that has been converted into a cozy studio with a large, comfortable bed, full kitchen, bathroom with a shower and tub might just change your mind. And then there’s the original split door.

Set in a delightful village on the northern edge of the Cotswolds, Troy’s Barn in Farthinghoe, England is one such peaceful bungalow. A short one hour drive from London landed us in a bucolic setting with easy access to several nearby villages as well as Oxford and Stratford-upon-Avon, home to none other than the “Bard of Avon” himself…William Shakespeare.

Katherine and David, the owner’s of the farm, are a lovely couple responsible for raising sheep, dairy and beef cows in addition to managing several hundred acres of arable land. This is a family farm, like so many others throughout England, that traces its roots back several generations. It is a gorgeous property with plenty of walking paths criss-crossing the hills and dales.

After settling in we took our first walk through a large meadow near the barn until we ran into a herd of cows, one of which chased after Fernanda, bringing an abrupt end to our walk! Since we don’t speak cow we gave way and headed back to the barn. Once back, we were enthusiastically greeted by all five of the owners dogs, each of whom were considerably friendlier than that cow!

Although the barn had a complete kitchen we also had the advantage of being a few hundred yards away from The Fox, a wonderful country pub located in the heart of the village, featuring simple yet good food in a relaxed setting. A favorite of locals and travellers alike, this dog friendly pub (as many pubs are), with its roaring fire and lively patrons, was the perfect place to end our first day.

Our first morning at the barn found us waking early as the light coming through the windows was our natural alarm clock. After a restful night we woke hungry and anxious to light out for the day.

Katherine recommended that we try Limes Farm for breakfast so it was an easy choice before boarding the bus to Oxford, our destination for the day. Being that Farthinghoe is a small village Limes Farm was a mere 15 minute walk from the barn. Limes Farm is a 200 year old, family owned and operated farm, serving up a great breakfast as well as local produce, uncommonly good baked goods and expertly butchered meats that come from within a “one food mile” radius of their farm.

While at Limes Farm we met “farmer John”, a gentleman whose family had a multi-generational connection to the farm. A funny and interesting man, John had never travelled outside the Farthinghoe area and never found a need to. At nearly 80 years old there aren’t too many people that can lay claim to staying “close to home” like he could. Ever the gentleman, John was smitten with Fernanda and displayed his affection by asking her “how did he get so lucky to have found you?”

With breakfast complete and the coffee taking its rightful place in our veins we walked to the bus stop to Oxford. An hour long ride through the rolling hills and farms was about as relaxing a commute as one could possibly imagine.

Once in Oxford Fernanda became our navigator and tour guide for the day as she had spent time here decades ago while attending school in London. One day in any city, let alone a city as rich in history as Oxford, is an exercise in futility as its sheer size and historical importance beg for a longer stay. Thus our decision to return once our time in Farthinghoe was over

With the sun announcing its arrival early the next morning we were anxious to get out, have breakfast and take the bus, actually two busses, to Stratford upon Avon

October is largely considered the off-season, yet Stratford upon Avon enjoys a year-round stream of visitors who, for the most part, are there to visit the home of William Shakespeare. Although the town is synonymous with the famous Bard it is much more than that. It is also a market town with more than 800 years of history containing many of the buildings that would have been familiar to Shakespeare. It is no wonder that visitors flock back time and again to discover this magical town’s many treasures.

After our day in Stratford upon Avon, we enjoyed another great meal at the Fox. Sitting at a small table near the crackling fireplace we were surrounded by a boisterous bar crowd of locals as our table mates. As much as we would have liked to join in the lively banter after dinner it would have to wait for another time knowing that we would be leaving early for Oxford the following day.

We headed back to the barn and called it a day with the farm dogs bidding us good night.

Currently living in Savannah, Georgia. Continues to travel the world in search of unique stories involving adventure, architecture, culture, food & markets, people and the most beautiful places on earth.
All Posts »
PrevPreviousWaiting on the kids
NextThe kids are alrightNext