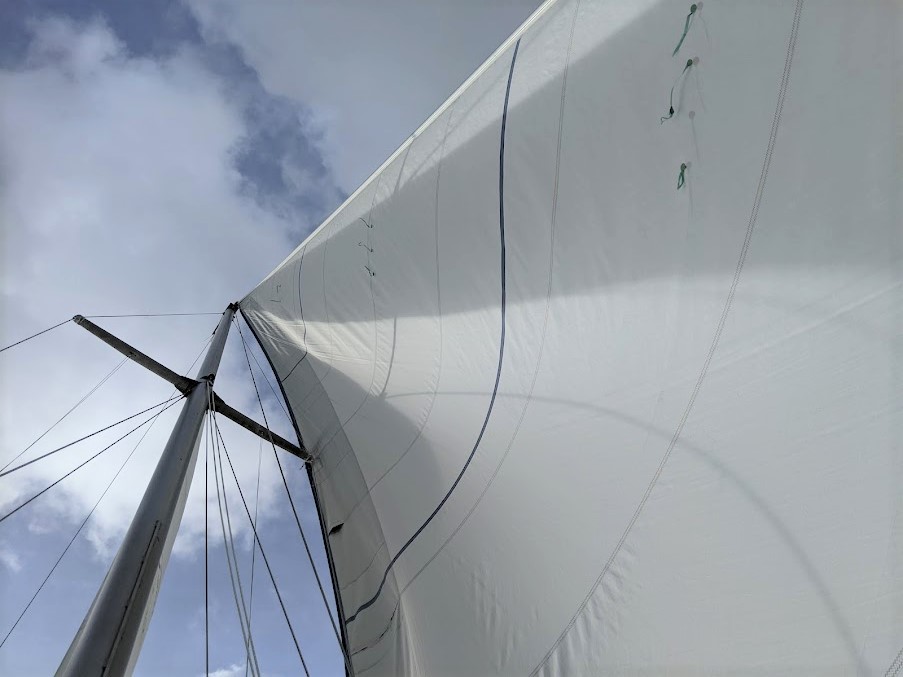 After nearly two years of travelling the globe with no chance to set sail we finally had the opportunity to go sailing in Savannah.

Anxious to get back on the water after a long absence we contacted Compass Sailing Charters on Wilmington Island and booked a Sunday afternoon sail with the affable Captain Steve Horton. Under a patchwork sky of platinum and blue we boarded the Zingara, a 38’ classic Morgan sailing yacht for an introduction to the coffee colored waters, emerald green marshes and photogenic shoreline communities of Georgia’s lowcountry.

Having spent many hours Sailing off the coast of Southern California we always knew what to expect…exit the marina, motor past the jetty and after 15 minutes, with sails unfurled, we were in the deep blue Pacific looking back at long stretches of golden beach backdropped by the San Gabriel mountains.

Sailing in Savannah however turned out to be a very different, yet equally enjoyable, experience as we found out on a late Sunday afternoon in August.

Departing from the Sail Harbor Marina and Boatyard on Wilmington Island Captain Steve offered us two options. Either sail east through the Wilmington River out to the ocean or along the Skidaway River which would take us past the historical Isle of Hope with its storybook cottages and stately homes dating back to the 1840s and 50s. We chose the “low and slow” option so as to experience the idyllic Skidaway River coastline.

We sailed slowly (due to light head winds) along the shore passing such noteworthy landmarks as the Skidaway Island State Park with its sturdy three story observation tower. The park also houses the 53 year old Skidaway Institute of Oceanography, a multidisciplinary research and training institution which has been a part of the University of Georgia since 2013.

As we relaxed in the deck of the Zingara numerous travel stories were exchanged while Steve and Zach (Steve’s son) provided us with a snapshot of the local flora and fauna along with the history and lore of this region. We were also given a lesson on how the two-times-a-day tide works in these rivers.

Zach also pointed out the Savannah Yacht Club (SYC), located on Whitemarsh Island, a short distance from where we sailed. Dating back to the late 1800s the SYC has seen its share of luminaries, most notably the billionaire conservationist and philanthropist, Ted Turner. Turner began his love of sailing on the Wilmington River as a young boy and his passion never wavered. For nearly forty years he owned the nearby island of St. Phillips and used it as a private beach retreat for his family.

Today the island is owned by the State of South Carolina and remains as pristine and untouched as when the Turner family enjoyed their time there. It is widely considered to be the most ecologically significant jewel in the crown of the South Carolina state parks system

Before long we were gliding past the crescent-shaped, picturesque shoreline of the Isle of Hope which, for its first 150 years, was a quiet settlement and home to a small number of fishers and farmers. All that changed around the mid-19th century when wealthy Savannahians began building vacation homes to escape the triple threat of oppressive summer heat, seasonal mosquitoes and a yellow fever epidemic that was ravaging the city. By the early 20th century it became a suburb of Savannah with a population of year-round residents. From our vantage point on the water you could be forgiven for mistaking it for a Gatsbyesque movie set.

As we sailed on we were struck by the flatness of the landscape, with its wide open panoramas that resemble works by 19th century Plein Air masters. Such was the beauty of the brown river water, bordered by vibrant green marsh grass and backdropped by endless blue skies. The low horizons and mile high skies make for lasting impressions both grand and sublime.
Oftentimes when we travel to a place it will remind us of somewhere else we have been. Moving lazily along the Skidaway River with a light rain falling it occurred to us that this place is like nothing we have ever seen. Observing egrets, dolphins and an enormous osprey nest perched high in dead tree was a reminder of the powerful effect that a “sense of place” can have on us.

On the return trip, with the strengthening wind and the tide at our backs, the sails were a little fuller yet our pace was still unhurried. Under darkening skies brief showers came and went while storm clouds in the distance dropped massive curtains of rain across the late afternoon sky.

Thanks to Steve and Zach, sailing on the Skidaway River helped us discover a new sense of place.