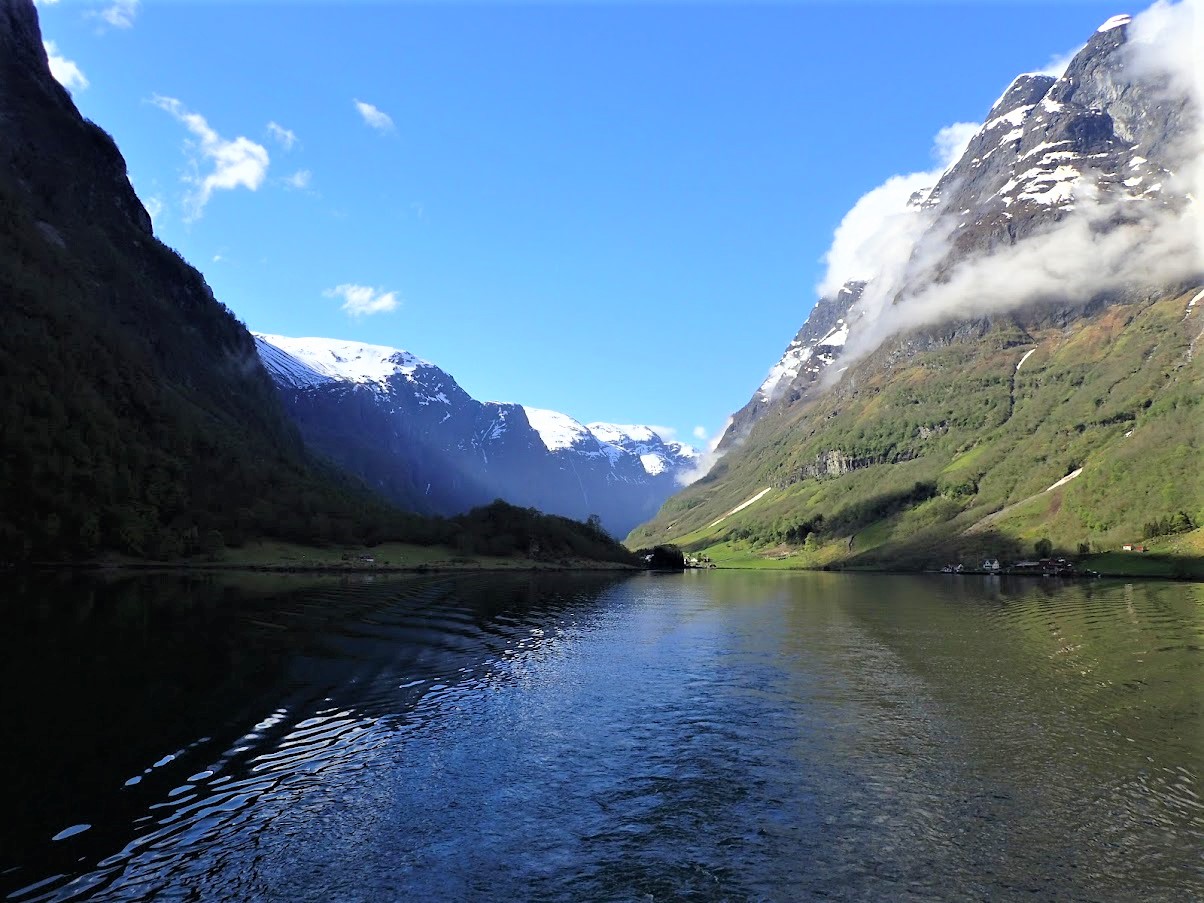 Our adventure on the Flam Scenic Railway began by boarding the passenger ferry MF Lustrafjord in Gudvangen for a two-hour journey through the UNESCO World Heritage fjords of Nærøyfjorden and Aurlandsfjord on our way to the historic village of Flam.

Norway is by far one of the most beautiful places on earth and home to more natural wonders than one could experience in several lifetimes. Without a doubt, among the most notable features of Norway’s breathtaking scenery and primeval landscapes have to be its fjords.

With over 1700 named fjords dotted along its 36,000 mile long coastline along with several UNESCO protected fjords in the country’s interior, it is easy to see how fjords have come to identify this beautiful country.

One such protected fjord is Naeroyfjord, which at nearly 11 miles long is considered the wildest and most beautiful branch of the massive Sognefjord. The journey through Naeroyfjord is considered to be among the most dramatic in Europe…which is no small claim for a continent with its fair share of fjords.

From a passenger ferry to one of Norway’s most legendary train rides.

On a crisp May morning under deep blue skies we departed from the Viking village of Gudvangen aboard the passenger ferry MF Lustrafjord for the two hour journey to the village of Flam for our thrilling ride on the world famous Flam Railway. Cruising north up the Naeroyfjord we passed idyllic farms with deep green pastures clinging so precariously to the steep mountainsides they looked as though they could slide down at any moment. Equally spectacular were the dozens of ice cold waterfalls bursting forth from the snow packed mountains framing both sides of the fjord. It was all so impressive that we could barely catch our breath.

After an hour on the Naeroyfjord the captain made a hairpin turn and headed south, threading his way through the 18-mile long Aurlandsfjord, which was also bordered by steep mountains, dramatic landscapes and picturesque fjordside villages. After another hour of jaw dropping beauty the MF Lustrafjord docked at the village of Flam.

Shortly after arriving in Flam we presented our tickets to the conductor and boarded the Flam Railway El 17 train with its deep green passenger cars for the exhilarating one hour ride to the Myrdal station, nearly 3000 feet high above Flam. Unanimously described as one of the most thrilling and beautiful train journeys in the world the Flam Railway is a leading tourist attraction in Norway.

We were about to find out why.

The 12 mile long Flam Railway is widely regarded as one of the greatest engineering feats in Norway especially considering that construction began in 1923 and took 17 years to complete…which pencils out to roughly 1.5 miles of line completed per year. It is also one of the steepest standard gauge lines in the world with 80% of the trip running on a gradient of 5.5%. Of the 20 tunnels 18 were built by hand. The popular bike/hike road that runs alongside the train was originally built to transport materials from the Flam to the mountains.

The journey has eight stops, twenty tunnels and a horseshoe curve that runs through the Vatnahalsen tunnel. It exits the tunnel onto an artificial shelf built into a cliff that falls hundreds of feet straight down. Needless to say, if you are on the side of the train overlooking this vertiginous drop and have a fear of heights this part of the ride may not go well.

It is a spectacular journey made all the more so by the surrounding mountains, deep river gorges and small farming communities fed by numerous waterfalls that pour into sparkling rivers. Water is not a commodity that is in short supply in these mountains.

One of the larger waterfalls is the overpowering and impressive Kjosfossen. It is one of the single largest waterfalls that we have ever seen and is legendary in Norway and beyond. With a massive drop of 740 feet it is truly a sight to see. Thankfully a viewing platform was built alongside the rail line to allow passengers the opportunity to get out and experience the falls up close. The thunderous roar created by the falls made it nearly impossible to hear anything and had the wind been blowing in our direction we would have been treated to a good soaking.

Arriving at the Myrdal station (elevation 2,833 feet above sea level) we instantly felt the cooler air from our starting point in Flam at 6 feet, 7 inches above sea level. Not only was the air cooler but considerably thinner as well.

One of the great attractions to the Flam Rail adventure is that is affords passengers the opportunity to hike or bike from Flam to Myrdal and then return on the train or take the train to Myrdal and hike/bike back to Flam. Our choice to take the train up and hike back was a wise one considering the substantial elevation gain over the 12 miles.

Over the next three hours we walked along the narrow gravel road stopping frequently to take in the numerous waterfalls and rushing rivers cascading from the nearby snow covered peaks. As the afternoon began to warm it was not long before we stripped off our layers and were down to tee shirts while enjoying the high altitude sunshine.

It surprised us that being such a popular tourist attraction that there were almost no people on the trail heading down from Myrdal. Over the seven mile hike down we saw no more than a half dozen other intrepid hikers. Perhaps it was the time of year (late spring) or the fact that we were there on a weekday but we were more than happy to be alone in this vast wilderness.

While the Flam Railway is a spectacular train journey that offers panoramic views of some of the wildest and most magnificent nature in the Norwegian fjord landscape there is no replacement for putting one foot in front of the other and enjoying the scenery from the ground. Whether you hike or bike up and take the train down or the other way around booking a one-way journey is the way to go.