Adventure to the end of the earth 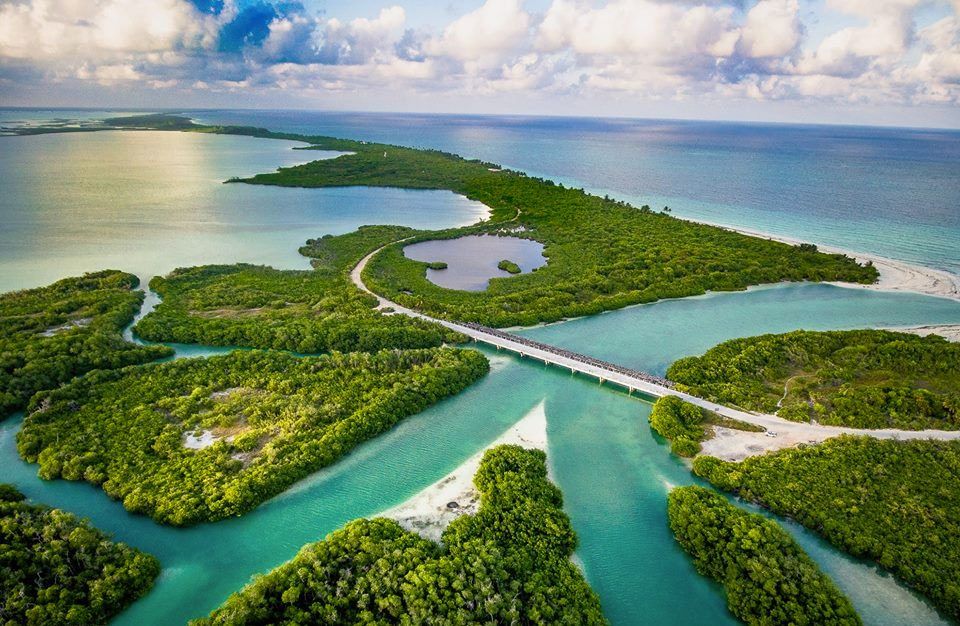 A dusty, bumpy, 2-hour adventure to the end of the earth

There are roads that take us to dizzying heights, cross endless wind driven deserts or drop down breathtakingly steep narrow roads into fantasy seaside towns. And then there is the road (if you can call it that) to the small fishing village of Punta Allen on Mexico’s east coast.

Thirty five miles from the bustling and ever expanding beachfront resorts of Playa Del Carmen and Tulum, the tiny village of Javier Rojo Gómez, more commonly called Punta Allen, has a laid-back ambience reminiscent of a time before the tourist boom when numerous fishing villages dotted the coastline of the Riviera Maya.

Over the 10 years that we have been visiting the Maya Riviera we have witnessed firsthand the massive growth of this region. Stemming from mounting pressure by developers and Mexico’s Tourism Board what was once a peaceful, sleepy town has morphed into a garish outdoor mall. In the case of Tulum, once a hideaway for the international backpacking crowd, travelers will be hard pressed to find a hotel room under $300.00 per night. And that is considered a bargain.

Somehow, perhaps through its sheer remoteness and difficulty to get to, or the explicit desire among locals to maintain their hold on paradise, Punta Allen has kept itself it the rearview mirror of the Riviera Maya’s ever expanding growth. For now.

Viewed from the air Punta Allen appears as a sliver of sand and jungle separated from the mainland. Were it to lose its fragile connection at the point just south of Boca Paila it would become an island. Peninsula or island Punta Allen is an exotic paradise known by few but admired by those who have discovered its raw beauty.

Our first of two experiences with the jarring, pothole infested, tongue biting road to Punta Allen came in late September as we pointed our rented Toyota sedan south to discover this magical land. There are further points south (Chetumal) but the 35 mile long spit of sandy coastline that leads to Punta Allen feels like the end of the earth.

Once we arrived we understood why.

The road to Punta Allen was everything it was advertised to be. Crater-sized potholes large enough to swallow small cars along with sand the consistency of baby powder. When another car passed, sometimes at breakneck speeds, the cloud of dust became like fog. The only difference was that the dust came through the vents in the car and settled everywhere. At least the road was dry. We heard that it can become like a raging river during the rainy season when the potholes turn into swimming pools making the journey even more treacherous.

Continuing south we passed mile after mile of rugged coastline to one side with thick jungle on the other as the road took on the appearance of a bombed out scene from a Hollywood war movie. Although the trip is only 35 miles it is very slow going which was a good thing as it gave us the opportunity to simply slow down and enjoy the scenery.

Although there were numerous turn-offs to secret beaches and mangrove swamps we did not stop much as were eager to get to the village. When we came to the bridge south of Boca Paila we pulled over for the first time hoping to see some of the crocodiles that populate the area. No crocs that day but we did see plenty of what many come to this place for…bonefish. Punta Allen is regarded as one of the meccas for catch-and-release bonefishing, drawing anglers from all corners of the globe to wrestle with these silvery and lightning fast fish.

Not long after we crossed the bridge we began to see signs of life. Motor scooters buzzed passed us in both directions, sometimes precariously holding three people in barely enough space for two.

We had arrived at the “end of the earth” and it truly felt that way.

To describe Punta Allen as “sleepy” would be an understatement. In the middle of the day it is more like the entire village has gone into some sort of heat induced coma. The dozens of empty plastic beer crates stacked throughout the village may have something to do with it.

The most recent census calculated the population of Punta Allen at 469 people. On the day that we arrived it seemed like 400 of them were missing. It appeared that there were more dogs than residents. Woof.

Being that our outing was merely a scouting mission for a return trip with Fernanda’s father and his girlfriend we didn’t spend more than an hour in the village. We bought a couple of coconuts and sat in the shade of the plaza gazing out at the clear blue waters. Mission accomplished we headed back to Tulum. Whatever bones that had not been thoroughly rattled on the way in would succumb on the return trip.

Two days later we picked up Eddie and Tania at their place at headed back to Punta Allen. Little did they know that we had already made the journey as we set out like a couple of “road to Punta Allen” veterans. The jungle holds secrets and this would be ours as we bounced and jostled our way over the dusty moonscape once again. The road was no less forgiving the second time around yet knowing what to expect kept us in less frightful spirits as our backseat passengers marveled at our driving skills.

“You are doing a great job driving” said Eddie. “Yeah…you would think that I’ve driven this road before eh?” I confidently replied.

Once we arrived in the village we had a couple of beers to wash out the dust and then hired a captain to take us out to the “flats” in his panga for a couple of hours. Within 15 minutes Ramon had taken us a quarter mile from shore and dropped us in knee deep, crystalline water.

One normally expects water to get deeper as you head further into the ocean but that is not always the case in Punta Allen. Small islands, sandbars and numerous other underwater features create a waterscape that defies description. One minute the water is 30 feet deep and the next you can jump out of the panga into sandy shallows as warm as a late evening bath.

In a word it is magical.

We spent the afternoon in and out of the boat while Ramon searched for endangered giant sea turtles. Mexico is considered one of the best places in the world to dive and swim with sea turtles. However, as a result of all the rapid development to the north sea turtles have been pushed further south to Punta Allen which is now their safest, most natural habitat on the coast. When we did spot these sensitive, gentle creatures Ramon respectfully requested that we stay in the boat so as not to disturb them.

Fishermen respect their environment and nature in ways that perhaps the average traveler may not. Listening to Ramon discuss the virtues of protecting the turtles was a lesson in one man’s profound love and understanding of his surroundings. His sentiments were not lost us us.

With our watery excursion over we headed back over the dusty road to Tulum. Although we never saw any crocodiles, or the elusive jaguars that loom in the jungle we were enlightened by our afternoon adventure to the end of the earth.