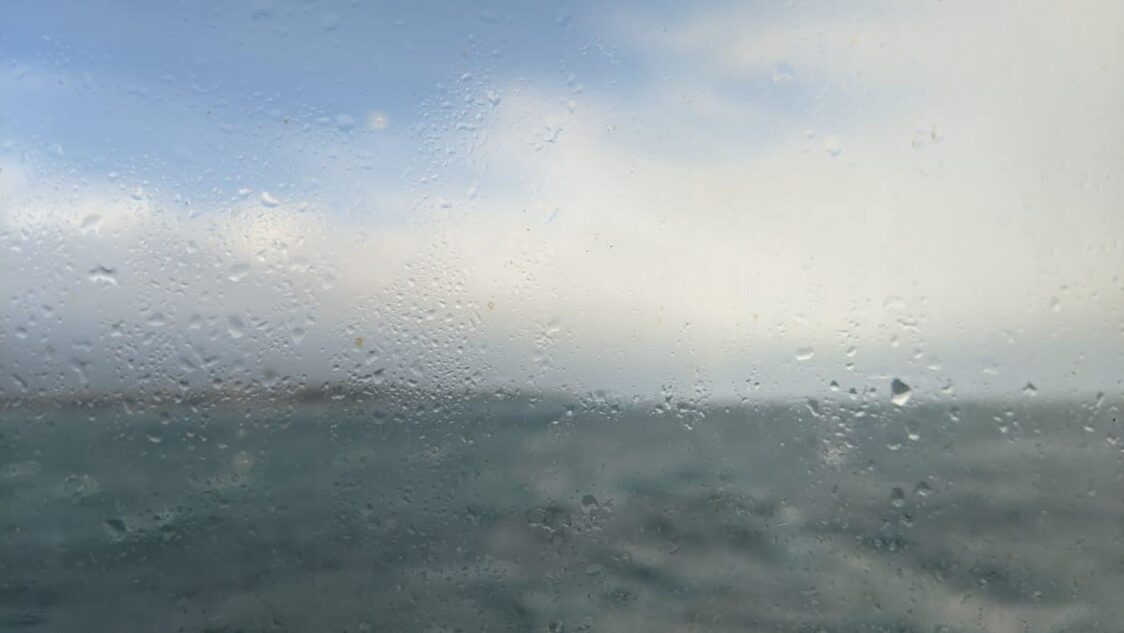 Today the rain was real.

Not the usual “possibility of rain with partial sunshine by midday” kind of hopeful forecast. No…this was rain traveling at a high rate of speed as it lashed our faces the minute we stepped out the door.

Or as our cab driver called it…a typical December day in Scotland.

Thus began our day as we departed from Fort William to Glasgow on a nearly four-hour journey by train through the Loch Lomond &  Trossachs National Park, Scotland’s first National Park. This vast area is often referred to as “the Scottish Highlands in miniature.”

This landscape is where the fault line that divides the Lowlands from the Highlands runs right across the park making this an endlessly varied part of the world. Today it will be best experienced from the comfort of a warm train car, especially with the capricious weather.

As the train pulls out from the Fort William station the anticipation of our upcoming journey is palpable. Bags are secured, seats are taken next to large windows and we’re off on another new adventure.

Little do we know the ride that we are in for.

It is not long after departing that all traces of civilization disappear as the runs between stations become further and further apart. Soon the train is cutting a path through clouds and fog as thick as the pine forests that surround us. We are climbing. There is water everywhere. Streams, rivers, lakes, and waterfalls of gargantuan size and power burst almighty from the landscape.

And then there is the rain.

Rain so savage that it assaults the windows hard enough to feel as though they will shatter. It sounds like birdshot is pelting the train.

In a rare moment when visibility became possible, I spot a large herd of wild deer camouflaged against the brown hillside. At the sound of the train whistle, they erupt in a frenzy making the whole hillside appear to come unglued like a giant mudslide.

We are now one hour into our nearly four-hour journey.

As we continue to climb grey skies turn to charcoal and charcoal turns to black. It seemed as though night had fallen yet it was only 1 pm. With this terrain and type of weather, it is no wonder that you see so many abandoned cabins and makeshift dwellings. The wild deer are the only inhabitants braving this inhospitable, high altitude terrain.

When the fog and rain occasionally release their grip on the sky, massive mountains emerge threatening to make our train a perfect appetizer, just before consuming the villages below with their monstrous appetites.

I step outside to witness the weather first hand. It is even nastier than it looks from the comfort of my seat. I vainly attempt to take a photograph not really knowing what it is I’m trying to capture.

As if the scenery were not amazing enough already, the mountains are now covered in forests so green, black and dense that you can barely see through them as the weather goes from vicious to whatever comes after vicious. We continue to climb as though, at some point, we may finally be greeted by sunshine. That will prove to be wishful thinking on a day like this.

As the second-hour passes I become more and more aware of just how remote this place is. It is the kind of remoteness that garners little to no recognition in sunny tourist guide books. A mountaineer’s destination it may be, but it is certainly not for the faint of heart.

And still, there is water.

There are enormous waterfalls so voluminous they appear to be hanging glaciers as they cut massive gashes into the impossibly steep mountainsides. When these near-vertical falls do eventually flatten into rivers they overflow their banks, flooding nearby meadows, creating hundreds of small lakes. The amount of water here is simply mind-boggling. Out here the raw and overpowering hand of nature is on full display.

Then seemingly out of nowhere, through a thicket of trees, I spot a massive hydroelectric plant looking every bit the part of villain’s lair from a James Bond film. No villains here, however. Only a team of technicians sitting in a control room harnessing the raw power of nature for the good of their fellow mountain, city and village dwellers.

Hour three brings more of the same. Massive bodies of water are shrouded in impenetrable layers of fog while legions of trees patiently wait out the winter chill until they can once again wear their vibrant coats of green. The wind does its best to remove the last of the most tenacious leaves clinging mightily to their branches. This is a brutal time of year to be a tree.

Suddenly the rain is moving sideways to the train and equally as fast. It is as though some enormous, otherworldly liquid train is travelling in the opposite direction. It is the stuff of dreams and beyond surreal.

Slowly the feeling that we are descending becomes obvious. Before too long we observe flocks of sheep grazing in flashy green meadows satisfying their insatiable appetites. The waterfalls are far behind us as we begin to see lochs filled with dozens of fishing vessels. These platinum colored sea inlets look so cold they could freeze fish. Visions of baked Scottish salmon are starting to occupy our hungry thoughts.

With our high altitude adventure behind us we speed headlong toward Glasgow, passing towns and villages buzzing with signs of life. We have returned to the low country. Any trace of daylight is all but gone now, although it is just past 3pm.

After a blacker-than-night final passage through a long tunnel we arrive at the Glasgow station with our attention laser focused on a good meal and a warm bed.

As our journey comes to an end I reflect on how easy it is to understand why train travel carries with it a touch of romanticism, along with an inclination to wax poetic on the wonders of travel and exploration. Once you have enjoyed a train journey or two you come to appreciate the allure of time spent on the rails.

Final stop. Everyone gets off. It is still raining.