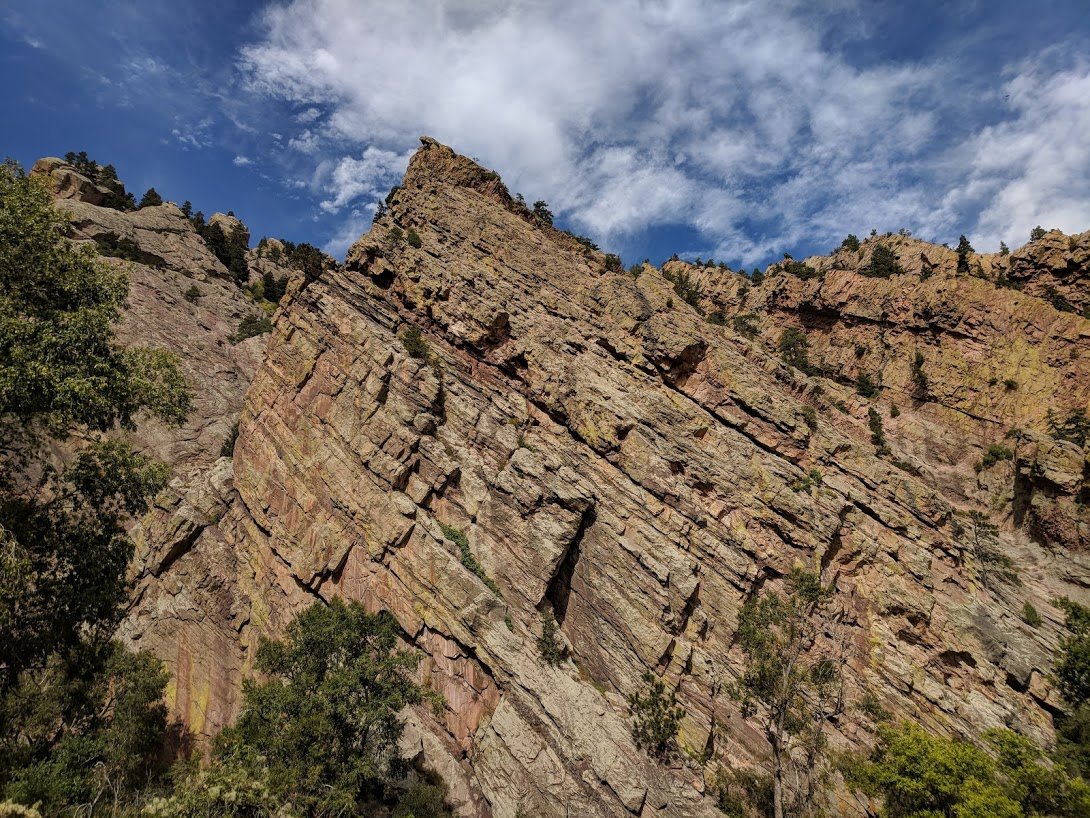 During our 4 day visit to Boulder we took full advantage of the gorgeous Indian Summer weather and the crystal clear, mile-high air to explore several of the nearby hiking trails. Trekking to the Continental Divide was a high point. 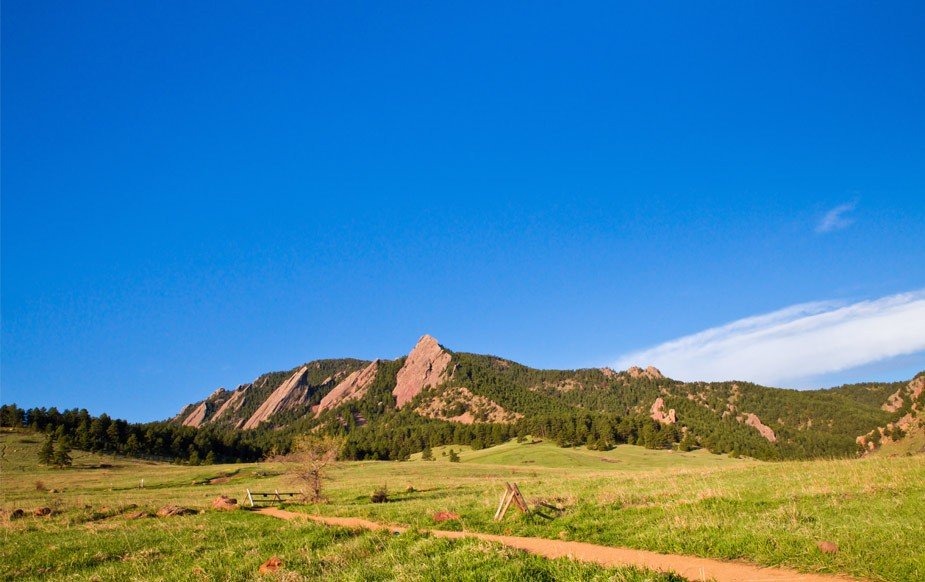 An early morning taxi dropped us at LAX for our first trip to Colorado. First, stop Denver International Airport followed by a short drive to Boulder for a 4-day stay.

Our lodging of choice was the Historic Hotel Boulderado, a clever mashup of the words Boulder and Colorado devised by the founders to gain the public’s attention. The hotel was an immediate hit and has been welcoming guests from around the world since New Year’s day 1909.

After checking in and dropping our bags in the room we headed down to the lobby for lunch at the Spruce Farm & Fish…a casual farm-to-table restaurant part of which occupies the original front porch of the hotel. Very charming.

Having finished lunch it was time to check out the town. With the pedestrian friendly Pearl Street Mall two blocks away it was a good excuse to get out and stretch our legs. We spent the afternoon gallery hopping, ducking into the many retail shops offering an international array of outdoor clothing and gear, and of course…scouting the numerous restaurants for dinner options!

We returned to the hotel for a quick siesta, followed by a cocktail at the bar and then it was off to Via Perla for a great Italian dinner on their sidewalk patio. The vibe felt a lot like being in Europe. With the sun setting behind the surrounding mountains we enjoyed a leisurely meal along with some great people-watching.

A short evening stroll after dinner was all we needed to wrap up our first day in beautiful Boulder. Time to get some well-deserved sleep and rest up for day two!

Our lodging of choice was the Historic Hotel Boulderado, a clever mashup of the words Boulder and Colorado devised by the founders to gain the public's attention.

Rise and shine to some strong coffee and breakfast at the Spruce Farm & Fish before heading over to Estes Park and a morning hike to Gem Lake.

If your definition of a gem is something small, beautiful and precious then Gem Lake will not disappoint you. It is a short (less than 2 miles), but at times challenging, hike that ends at the shore of this snowmelt and rainwater fed lake.

The first half-mile of the Gem Lake Trail takes you through a narrow, boulder-strewn canyon with the second half being quite steep. Several rock steps, some one or two feet high, have been built into the cliff face making your progress a bit slower that the bottom half.

Near the top of the climb and just before reaching the lake there are some absolutely spectacular views of Estes Park, Mt. Meeker, Longs Peak, and the mountains along the Continental Divide. It is not a stretch to see why Gem Lake is one of the more popular destinations in Rocky Mountain National Park.

We drive back to Boulder, drop the car, and head over to Bar Taco on Pearl Street for some of the best street tacos north of the border. Think great beachfront tacos in So. Cal., Mexico or South America but in the middle of the Rocky Mountains and you get the drift. An array of roasted cauliflower, beef and chicken tacos, a couple of beers and some friendly conversation with the staff and it’s time to knock off for our afternoon siesta.

The evening finds us in the same routine as the previous night. Freshen up after our siesta, enjoy a cocktail in the gorgeous lobby and head out. There are so many great restaurants in, and around, the Pearl Street Mall that just trying to decide where to eat will work up an appetite. Solution…take the path of least resistance and head back to La Perla for another fantastic Italian meal! The second time around did not disappoint.

After dinner, we walked around town until we heard some music coming from one of the nearby hotels. We camped out by the fireplace in the lobby and spent an hour listening to a father & son duo, along with a third musician, play a host of bluegrass, folk and original songs.

If your definition of a gem is something small, beautiful and precious then Gem Lake will not disappoint you.

Taking advantage of the beautiful Indian Summer weather we are up early for a breakfast of veggie frittatas and potatoes before heading to Eldorado Canyon State Park for our first hike of the day. After a short 30 minute drive from Boulder, we arrive at the trailhead of the Eldorado Canyon Trail. ECT is a 6.2 mile out and back trail with an elevation gain of 2000 feet and is a relatively moderate climb…except for the occasional shortness of breath for us sea-level dwellers! Fantastic views of the surrounding mountains made this a great hike and being in the park after the Labor Day weekend ensured that the crowds were considerably lighter. We literally had the trail to ourselves for over 3 hours.

That afternoon we revisited the park (thanks to our all-day pass) to try out another trail. This time the trail was flat and in a large horseshoe shape as it meandered along steep rock faces popular with climbers. Once out it the open the views of the plains below were spectacular. Moving in and out of the sun made for some great photographs on this relaxing hike. On our return, we stopped to marvel at some local climbers moving up the rocks like agile spidermen.

After a full day of hiking, it was back into town for another relaxing dinner followed by hanging out with a group of street musicians from around the world. The lively nighttime street scene capped another fantastic day in and around Boulder.

Fantastic views of the surrounding mountains made this hike one of the better ones in the park. Being there after Labor Day also made for much lighter traffic on the trails.

It’s a perfect day for a road trip!

Up for a day’s drive, we decide to head up to Pikes Peak, also referred to as “America’s Mountain”. After a quick cup of joe in the lobby, we head out to Colorado Springs, home of the U.S. Olympic Training Center and its National Governing Body offices. We have breakfast in town then drive to the entrance of the park, a short 12 miles away.

As the second most visited mountain in the world behind Mount Fuji you can rightfully expect it to be busy year-round. However, on the day that we arrived traffic was pleasantly light, at the entrance as well as up the mountain. Unable to drive the entire 16 miles due to the construction of a new visitors center at the top we were diverted to a parking lot at mile 13 where a shuttle bus took us the rest of the way. This was a blessing because you are actually able to enjoy the views without fear of driving off the side of the mountain! With few guardrails, one needs to be ultra-focused as the road is narrow and there are many blind curves.

Safely at the top, we spent an hour enjoying the 360-degree views of the valleys, lakes and mountain ranges below. At 14,114’ in elevation it can, and does, get fairly windy and cold at the top so it’s best to be prepared!

On the drive back to mile 13 the shuttle driver shared with us the best place to view the changing colors of the Aspen trees once we got off the mountain. We followed his directions to an old, yet still active, gold mining region where we spent a couple of hours marveling at mile after mile of Colorado’s finest fall display.

With our road trip complete we headed back to Boulder for the remainder of the day to dine and rest up for the second leg of our Colorado adventure. The next day we were off to Denver to enjoy some “big city” arts, culture & food.

As the second most visited mountain in the world behind Mount Fuji you can rightfully expect the drive to be busy year-round. Lucky for us traffic was light the day we drove it

Four days to explore a town as rich in things to do as Boulder is never enough time. Here are a few activities that we would definitely do upon returning.